The world of NFT games and metaverse is ever-growing and developing. One of the most recent things that appeared there is the game Battle of Guardians, where a number of players can at the same time interact inside the NFT-based environment and earn considerable rewards. The game was created using the Unreal Engine and the multichain Solana network.

The game is really addictive. In addition, it is made by professionals concerning all the current tendencies. Interestingly, the game is not only aimed at making separate users wealthy and successful. Instead, the BoG will have a valuable contribution to a more stable economy in the long haul.

What is Battle of Guardian?

The game uses a PvP (player versus player) gaming model where players battle against each other and, based on the results of these battles, get prizes.

What is the Battle of Guardian game from the player’s viewpoint? In the game, they can be one of the 3 main groups of characters or races:

There are also other series of creatures:

The most powerful ones. Get extremely huge prizes in case they win.

The character takes place in between the two others. Get average rewards after fights.

For more excitement, there are also 3 different game modes:

Stories are basic fighting modes where players can only fight against computers. They consist of 25 stages with $FP rewards that vary in size.

This is the most complicated mode that divides players into groups of 8, 16, or 32 to take part in the tournament. Participation requires a fee, but in the end, the winner gets both the reward and all the fees.

Here players compete against each other in matches depending on their ratings to get the prize and top up their rating.

How to play Battle of Guardian?

The forefront Play to Earn game is available for users of computers as well as planned to be soon accessible for Androids and iOS gadgets. This means that mobile users, including iPhone owners, will soon enjoy the same game universe.

You can surely expect a balance of gameplay and earnings from this game.

It is really easy to start to play Battle of Guardian. First, there is a demo version that is available online. This is a sneak peek into the metaverse that will help you decide if you want to continue and take part in serious tournaments.

Next, users install the BoG on their PC. After that, they are usually recommended to join a Discord or Telegram group to be notified about updates in the live mode and receive relevant answers. Once you have any trouble not understanding how to play Battle of Guardian, the team will gladly provide information for you to keep enjoying the game!

Create a unique username and reliable password, and you’re good to go!

How Does Battle of Guardian work? 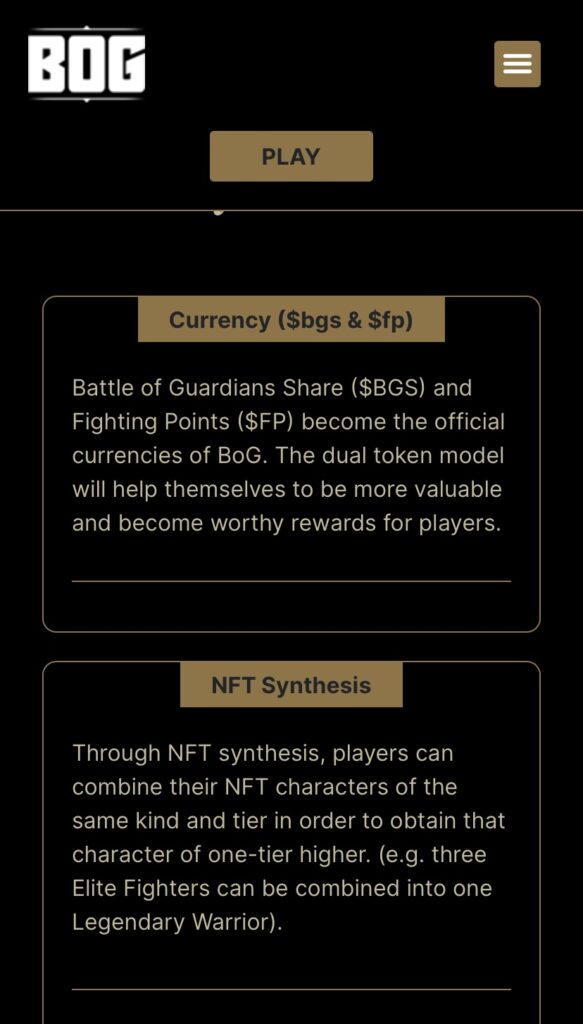 The Battle of Guardians is famous for its engaging play and motivating rewards. The three different races fight to conquer more opponents to gain rewards. The sense of the game is not only to earn from the blockchain’s power but to spend time enjoying the excellent graphics as well.

So, how does Battle of Guardian work once you’re in? The game offers users to purchase their NFT characters. They are subdivided into 3 categories (races), as you already know. Each of these races can also be of 3 types: common, rare, and ultra-rare.

Once they start playing Battle of Guardian, players stake a certain amount of $BGS to take part in an NFT drop. At the same time, this goes beyond the basics, and it is possible to craft a unique character one tier higher. This is done at the cost of combining the characters of the same kind: for instance, two elite fighters make one legendary warrior. This NFT synthesis is achieved only when paying $BGS and $FP.

How to make money on Battle of Guardian?

First, let us clarify which currencies are used in BoG. There are two coin types functioning inside the game:

There are a few interesting ways to make money on Battle of Guardian on our list. 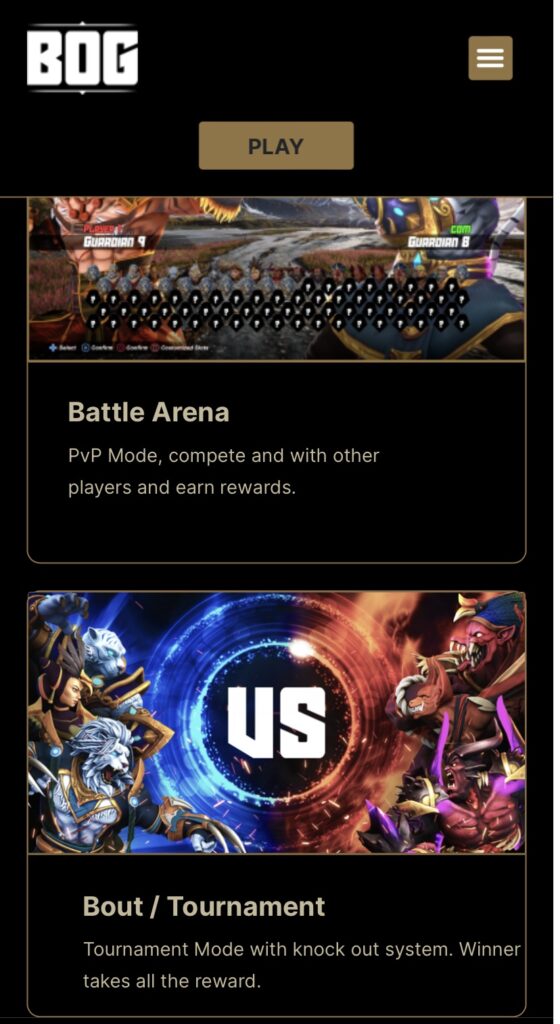 Not to go in too deep, fighting battles in the tournament mode and staking are the two most popular ways to make money with Battle of Guardian.

How much can you earn in Battle of Guardian?

Perhaps, no player doesn’t want to know the answer to ‘How much can you earn in Battle of Guardian?’. So first, let us look at the total supply of the key game tokens. Currently, there are one billion $BGS.

The important thing to consider is the distribution of these tokens among different game goals. First, we will look at the statistics of token sales. For instance, there are 100,000,000 tokens for the team, and for the ecosystem, the percentage is higher — 27% of all tokens, making 270,000,000. At the same time, Play to Earn gets 18%, and token sale breaks the record-making 28% depending on the match.

Still, the limits to how much one can earn money in Battle of Guardian remain very personal and dependable, specifically on a player’s behavior.

Today, the news about NFT market price prediction and new games is making top headlines. NFTs have left the borders of average marketplace sales and now are a part of the best metaverse world where anyone can start to create characters and have very personalized playing.

Still, the status of NFTs hasn’t reached its peak yet, with the price for many in-game assets being likely to grow, as well as the number of those desiring to buy them. So, get started and use this attractive and legit way to update your awareness of digital finance and get advanced in the sphere.